You often hear the phrase "time in the market > timing the market". Today we are going to dig in to whether it is really true... 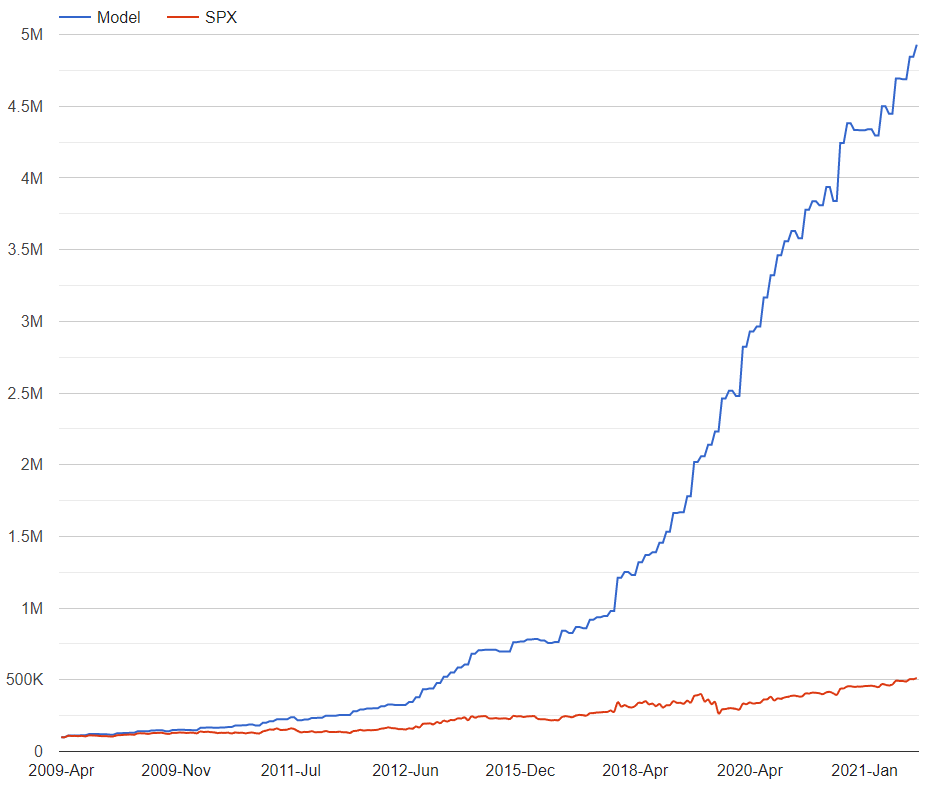 The things we are doing will not go away. We may have bad years, we may have a terrible year sometimes. But the principles we’ve discovered are valid. Jim Simons

The Great Debate over Market Timing

Let's start with understanding that there's a very good reason most people don't believe market timing works. They've tried it and failed or know someone who has. The statistics clearly show that the vast majority of people who try to time the market underperform over the long term.

But why is this the case? Some people look at the data and then draw the false conclusion that market timing must not work for anyone. That's demonstrably false as we have a plethora of counter-examples who have successfully timed the market consistently for decades. To name just a few:

What do these highly successful market timers all have in common? They are utilizing sophisticated algorithmic trading models to execute trades for them based on state of the art science and engineering. Before we dig into how they accomplish this, let's start with the basics.

What do we mean by "time in the market"

When people repeat the phrase "time in the market > timing the market", what they mean is that they either espouse some form of the Efficient Market Hypothesis (EMH), or they believe that the average investor does not have enough knowledge, time, skills and/or Stoicism to properly time the market. We actually agree with them on the latter, but vehemently disagree on the EMH, an academic theory that essentially claims that no one can ever have an edge because all information in the world is immediately and accurately priced in to the market at all times. Instead, we believe in the 95% EMH, but that 5% makes all the difference and perfectly explains how people with superior models can consistently beat the market. Also, it's worth quickly noting that some people believe market timing is possible but that the tax consequences are too great to overcome. We have an answer to that too.

In practice "time in the market" simply means buying and holding regardless of valuations, fundamentals, technicals, the state of the economy or any other factors—simply always being a "permabull". Another reason this phrase has become so popular in the last decade is that the strategy has worked quite well during that time since we've been in one of the strongest bull markets in history with only two 20%+ corrections since 2009, which were both almost immediately erased. However, investors with a longer memory or who have studied history remember the painful time of the "lost decade", which really was the lost 13 years between March 2000 and March 2013 during which the market did not set a new high on weekly closing basis and at one point was down nearly -58%.

Many people forget that secular bear markets are even a possibility, or indeed, some even claim that they are extinct in the post-QE era. We strongly disagree, and a lot of people who have been used to double digit returns for more than a decade now are in for a startling wake-up call over the next 10-15 years now that valuations are in the stratosphere and the Fed is becoming more of a headwind than a tailwind. Nevertheless, "time in the market" or buy and hold is definitely a much better strategy than trying to time the market using a hunch or by looking at a few charts or valuations. Without a sophisticated strategy in place, you are nearly guaranteed to underperform, because the truth is that timing the market is incredibly difficult to do.

What do we mean by "timing the market"

Market timing is a strategy in which investors try to take advantage of the market's ever-shifting swings between pessimism and optimism. Anyone who's ever looked at a stock chart can see that while stocks tend to go up over the long term, they never go up in a straight line. There are nearly constant shifts between bullish periods where stocks are rising and bearish periods where stocks are falling on all timeframes. A market timer simply wants to be long or own stocks during the bullish uptrends and short or market neutral (or in cash) during the bearish downtrends. Market timers differ in what timeframes they trade and what strategies they employ to try to identify trend shifts, but in principle they are all trying to successfully execute a strategy with this goal.

As we alluded to above, market timing gets a bad rap because it looks easy but is actually incredibly difficult, and attempting it has cost a lot of failed market timers a lot of money over time. People often look at the roller coaster that is the stock market and think, "If I had just sold here and rebought there I would be so much better off", and then they'll try to do that using some light technical analysis, valuations, intuition or other overly simple indicators and end up losing money instead. Then they'll often take a 180-degree turn and become ardent defenders of buy & hold out of the anecdotal experience logical fallacy.

The truth is that if executed successfully, market timing is much more profitable than buy and hold. You can see that from the chart at the top of the article which demonstrates the performance of our Vix-TA Advanced model. Buy and hold would have produced admirable returns of 14.44%, turning $100k into $512k. However this would have been totally dwarfed by this market timing model's performance of 35.66%, turning $100k into more than $4.9M.

What's the catch? Well, building a model that works as consistently as Vix-TA Advanced is ridiculously difficult, and it's likely impossible for an unassisted human to trade as well as our models consistently, just like it's essentially impossible for even the top grandmasters to compete against elite computers at chess. Attempting to time the market without an algorithm backing you up is like trying to play chess against Stockfish. Feel free to try; we applaud your courage!

How can average investors outperform the market?

Until recently, the answer was essentially, "they can't" with a few exceptions. That answer is now changing rapidly as the algorithmic trading revolution is finally opening its doors to normal folks.

What is algorithmic trading

At the simplest level, algorithmic trading (algotrading) is defining a set of rules, steps or heuristics and putting it into code so that the trades are executed automatically based on your instructions by your computer program. Many people confuse algorithmic trading with high-frequency trading (HFT), but whether your algorithm's trade frequency is 100 trades per day or 100 trades per decade is not what's important. What's important is whether it generates alpha or superior risk-adjusted returns.

Just like humans can no longer compete with computers at games like chess, human traders are having a harder and harder time competing with these algorithms in the stock market.

The good news is that in 2022, algotrading is no longer the domain of only billion dollar hedge funds. If you have some programming and trading experience, you too can deploy your own algorithmic trading model without much difficulty. However, the real challenge is developing a winning strategy.

If you don't have programming or machine learning experience, don't fret! This is the very reason we started Grizzly Bulls, to democratize access to the best trading strategies because we believe it's unfair they've been locked away for sole use by the top 1% for so long. In fact, it's often been these billion dollar hedge funds perpetuating the myth that market timing is impossible, because they don't want more competition in the algotrading space. They'd rather keep all the fat profits for themselves instead. For the first time, we're providing normal people with access to similar strategies that have made many Rentec investors centimillionaires or even billionaires.

At Grizzly Bulls, we've developed seven algotrading models represented by the cards below. Three are totally free and four more advanced models require an affordable premium subscription. Do you want to avoid market corrections and outperform the market as a whole? Are you scared of losing a decade or more getting back to break even if we have a similar bear market like the one that started in March 2000? Then start following the signals we publish from our algotrading models. With a premium subscription, you'll also receive automatic email notifications when the signals change.

CAGR: 15.23%
Never get caught in a large downtrend
Current signal:

Platinum
CAGR: 57.71%
Medallion fund not open to the public? No problem
Current signal: