The markets dove to new correction lows on Russia-Ukraine conflict headlines, but then the indices sharply rebounded after the invasion began...

As it seems every article in this series has started this year, we've just seen yet another very volatile week, this one with a major rebound to save the NQ from entering an official bear market, as usually reported on a closing basis. The Russia-Ukraine conflict headlines continued to steer market movements, with a sharp drop to start the shortened trading week into a large gap down on Thursday as the invasion was confirmed. However, from there the market surged the rest of the day and all of Friday, perhaps due to the removal of the uncertainty and weaker than expected sanctions on Russia coming from the whitehouse. It could also have been due to newfound belief that the Fed would use this geopolitical instability as an excuse to not raise interest rates at the March meeting, or at least slow the pace of the hikes.

The market is now pricing in a 76% chance for a 25bps hike compared to a 24% chance of a 50bps hike in March. This is down sharply from a couple of weeks ago when a 50bps hike seemed a near-certainty, and could partially explain the market's strong rebound late in the week. Is the correction finally over, or will this rebound be seen as merely an oversold bear rally on misconstrued Fed hopes? Follow the signals from our models, and you won't have to make that judgment yourself.

The SPX started the week with a sharp drop that lasted into Thursday's open, hitting a new correction low of 4115 (4101 on the futures overnight). However, after the panic selling opening on Thursday, the index surged the rest of the day to close +1.5% on the day in a huge swing. The bullish rebound continued on Friday as SPX closed the week green and sits barely back above its weekly lower Bollinger Band.

The Dow was the weakest index for the second week in a row, and the only index that closed in the red this week (if ever so slightly). However it remains the strongest on the year and has suffered the least drawdown overall. Nonetheless the recent weakness, exacerbated this week by a rough Home Depot earnings report continues to indicate that the growth-to-value rotation narrative went too far. The Dow followed much the same pattern as SPX this week, except with a much weaker rebound on Thursday. It closed well below its weekly lower Bollinger Band at 34,213. 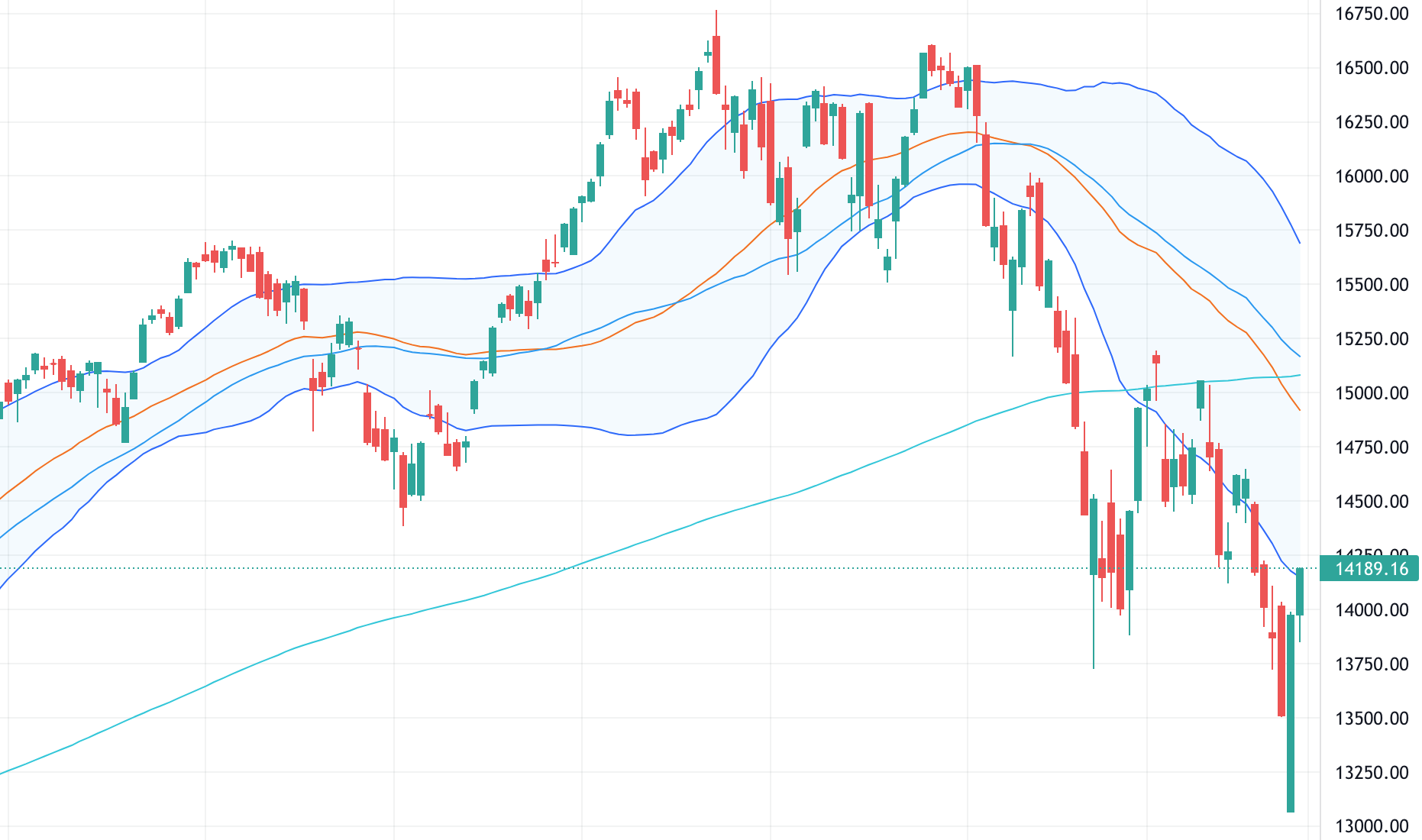 The NQ was the strongest index this week, yet remains by far the weakest on the year and throughout the correction. While following the same patterns as SPX and the Dow this week, its Thursday session was one of the wildest in years with a -3.29% open becoming a +3.45% green day overall. While this sort of extreme rebound is typically indicative of a major market bottom, it's still important to note that Thursday's new correction low 13,065 marked a -22.17% drawdown, qualifying for a bear market on an intraday basis. Conspiracy theorists may assert that the Fed had a hand in the remarkable recovery in order to avoid letting a major index close in bear market territory due to the inevitable psychological damage that would have done to investor confidence. The NQ now rests back above its weekly lower Bollinger Band at 14,149.

Though the economy appears strong, rates remain historically low and valuations historically high. This is a dangerous combination as the Fed continues tapering asset purchases and expects to raise rates in 2022 and 2023. This week unemployment statistics improved, but sentiment and valuations remain at bearish extremes. Many people are already proclaiming the death of the nearly 13-year long bull market. Will they be proven correct, or will the market surge back to new highs later this year?

2022 has started with a bang, and not a good one for the bulls. So far our working thesis of a pickup in volatility this year has played out. However, after a huge gap down on Russian invasion news, the bulls staged a very strong multiday recovery. The weekly candle certainly looks like it could mark the end of the correction, but bear market rallies have a way of tricking us into thinking the worst is over just before sinking to new lows. Who is right? It's impossible to judge at this point.