Volatility continued this week with sharp swings in both directions as the market continues to react to war headlines and economic data...

This was another very volatile week with some of the sharpest moves in both directions since the correction began at the beginning of the year. Monday's -2.96% performance for the SPX was the worst fall for the index since the COVID-19 decline in the spring of 2020. Fortunately several of our models shielded us from the majority of this decline. The market began to rebound mid-week as hopes of a peace resolution between Russia and Ukraine surfaced. However, that was not enough to keep the markets from a sharp decline near the end of the week as falling consumer sentiment and a searing 7.9% CPI report kept investors worried about increased Fed hawkishness in the near term and the danger of stagflation in the long term.

The market continues to price in just a 0.25% rate hike in March, and next week that uncertainty will be completely removed. However, inflation simply refuses to cool down and soaring oil prices from sanctions on Russia and fears of retaliation are only adding gasoline to the fire. The NQ became the first index to officially close in a bear market this week. Will the other indices follow? Or will the removed uncertainty from the first rate hike meeting in the coming week give the bulls the confidence they need to stage a rebound? Follow the signals from our models, and you won't have to make that judgment yourself.

The SPX started the week with a large decline on Monday, shaken from continued geopolitical news over the weekend. The index managed a decent comeback Tuesday afternoon, but couldn't hold the gains and closed red again. However, the futures bottomed overnight, and investors seemed to be encouraged by the potential for a higher low at 4157 (vs. 4101 on the ES futures in the early morning hours of the initial day of the Russian invasion on February 24th). This led to a strong rally on Wednesday, nearly touching the lower weekly Bollinger Band. However, the scorching hot 7.9% CPI report sent the market tumbling again to close the week moderately in the red at 4204. 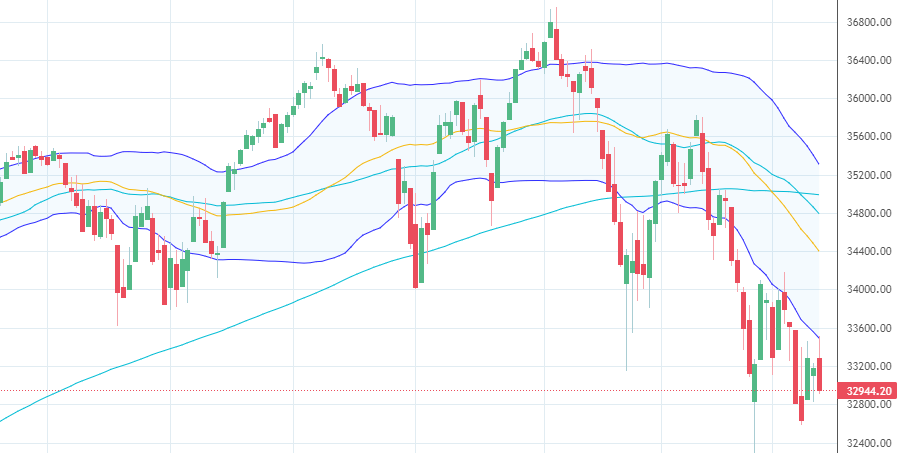 The Dow resumed its usual position as strongest index on the week, and it's now the only index that is not down double digits this year. The overall correlation of movements of each index has increased substantially over the last few weeks, with the moves just being muted in the Dow as it continues to benefit from some degree of "flight to safety" mentality in the blue chips. On Friday, the Dow was the most resilient, managing to hold the green until a breakdown over the last few hours to close the week -2% in the red. It now rests -5.85% below its 200-day SMA. 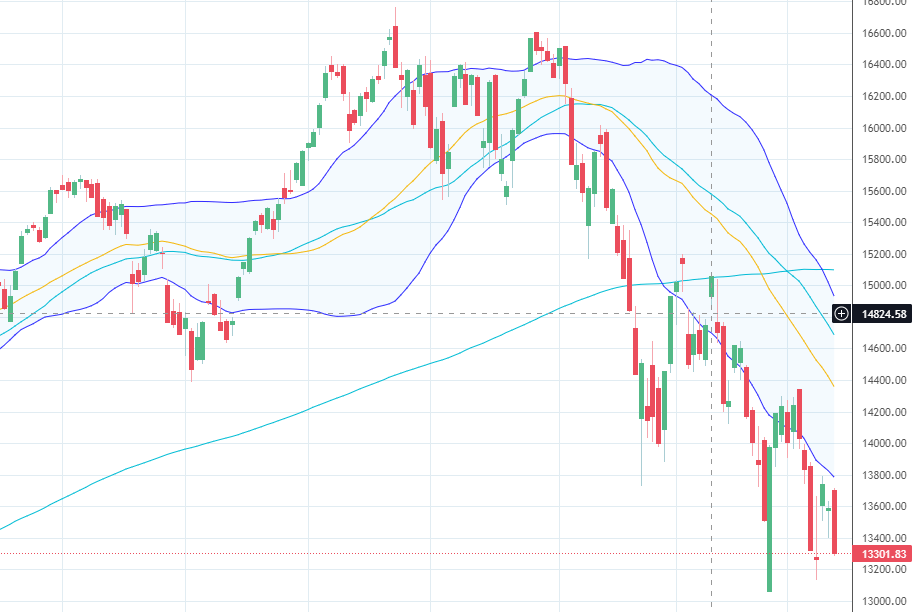 The NQ continues to be by far the weakest index, and it was hammered again this week, especially on Friday, to close an abysmal -3.87% in the red. The megacaps that were so resilient for years, holding up the market while small and midcaps traded sideways, have now turned solidly bearish. Once market darling Meta Platforms (FB) has now fallen -50% from its highs from last fall, and even AAPL and MSFT are seeing more selling than the overall market lately. Its clear the Nasdaq is in a bit of a negative feedback loop, whereby weak performance begets even weaker performance as many investors who never believed in the fundamentals and only bought in for the momentum on the ride up are now selling indiscriminately now that that momentum has reversed. The index now rests in deeply oversold territory, having closed with a confirmed bear market for the first time this week on Monday, and rests a whopping -20.65% below its November highs.

Though the economy appears strong, rates remain historically low and valuations historically high. This is a dangerous combination as the Fed continues tapering asset purchases and expects to raise rates in 2022 and 2023. This week treasury yields rose to put further pressure on relative valuations of stocks vs. bonds. The CARP being below 1.5 and especially below 1 is a sign of trouble for the equity markets as it shows that investors are not being properly compensated for the increased risks of holding equities over debt investments.

2022 has started with a bang, and not a good one for the bulls. So far our working thesis of a pickup in volatility this year has played out. Soaring inflation is keeping interest rates propped up and is the primary cause for this correction, with the geopolitical instability in Eastern Europe only exacerbating matters. Will inflation abate soon so that the bull market can return? Or are we doomed for a lost decade, a repeat of the horrible stagflation of the 1970s? Luckily our models should help us achieve a positive absolute return even if the overall market does not.