After a slow start, the market surged most of the week as the bulls regained their confidence with near-term Fed uncertainty cleared...

The bulls finally had an all-around fantastic week, with every major index up more than +5% in the strongest weekly performance in more than a year. As we mentioned last week, there was the potential for the bulls to regain their confidence after the uncertainty of the Fed meeting that took place on Tuesday and Wednesday was removed. As expected, the Fed increased the fed funds rate for the first time since 2018 by 0.25% and indicated just six more hikes this year which was slightly more dovish than expected. History will judge whether this rather mild response to the worst inflation figures in more than 40 years will be seen as adequate or a major policy mistake, but for the short term, the market is quite pleased with Powell's timidity.

Although inflation and the Fed's response continues to be the main dominating driver of market movements, the bulls also got help from the lack of any starkly different war headlines this week. Hopefully the geopolitical crisis in Eastern Europe is resolved peacefully soon, but either way it seems like the market is reacting less and less to these headlines for the time being. The Nasdaq 100's strong rebound off of bear market territory also helped bring out the fickle momentum traders, which certainly added to the gains on Thursday and Friday. Have we finally seen the lows for this correction? Or is this just one of those infamously vicious bear market rallies that hoodwinks us into believing the worst is behind us before the next rug-pull? Follow the signals from our models, and you won't have to make that judgment yourself.

The SPX started the week with a mild decline on Monday, continuing the bearish momentum from last week's close. However beginning in the premarket hours on Tuesday, the index started its strongest 4-day surge since November 2020 to finish sharply in the green on the week. It closed the week just a few points shy of its 200-day SMA at 4470. I expect this long term average to provide some resistance next week as the SPX has spent more than a month below it. Nevertheless, the bulls still have plenty of room to run before needing to worry about short-term overbought conditions as the index still sits -0.58% below its weekly upper Bollinger Band, and the 9-day RSI is only 60.12. 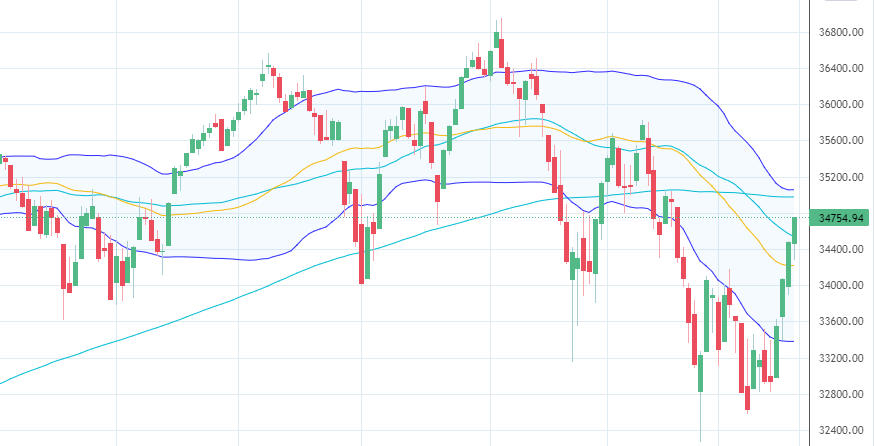 Although the Dow was technically the weakest performer on the week, it still surged a whopping +5.5% and closed on Friday just -5.95% below its all-time high of 36,953 set on January 5th of this year. Despite the strength of the rally, the index still rests -0.63% below its 200-day SMA, and like the SPX bulls, Dow bulls don't have to worry about overbought conditions yet. The biggest technical concern for the Dow is the slightly downward slope of its 200-day SMA, but if the bulls can muster one more strong week and manage to close above the long-term average, that should correct itself before any further technical damage is allowed to occur. 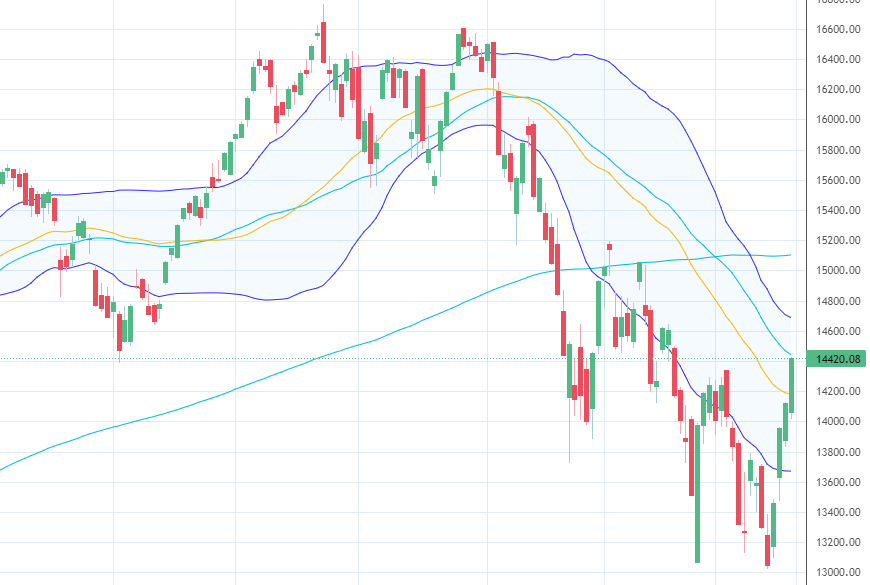 The NQ finally had a very strong rebound this week to close with by far the strongest performance out of the major indices, +8.4% in the green. Yet, it remains the only index still down double digits this year, and unlike the other indices that are within a stone's throw of their respective 200-day SMAs, the NQ rests -4.52% below the long-term average. Nevertheless, I expect the great rebound to bring back some positive sentiment from the waning momentum traders who soured on the index recently, which should be a boon to a continued recovery in the coming weeks.

Though the economy appears strong, rates remain historically low and valuations historically high. This is a dangerous combination as the Fed continues tapering asset purchases and expects to raise rates in 2022 and 2023. This week employment numbers improved with continued claims dropping substantially. However, the 10-year treasury yield continued to rise and the yield curve continues to narrow, but the 10-2 spread is still 0.21% from inversion, something that usually happens about 6 months to 1 year before a coming recession. Keep in mind that the market is forward-looking, and it usually peaks well before the start of the actual recession.

2022 has started with a bang, and not a good one for the bulls. So far our working thesis of a pickup in volatility this year has played out. However, the bulls staged a very strong rebound this week, and many are pronouncing the end of the correction with glee. We're more cautious than ever, as we are nearly in uncharted valuation territory. Despite the market being down more than -7% from its all time highs, Friday's close actually marked the most overvalued weekly close since 1999 relative to interest rates, as measured by the Shiller Risk Premium. This means investors are not being compensated fairly for the extra risk they are taking by keeping their money in stocks vs. bonds, especially given that bond yields are now rising quickly off historic lows.