After bobbing around the 200-day SMA technical resistance area, the market continued the rebound to close solidly in the green...

The bulls were able to extend the market rebound to a second week, albeit with much more modest gains than last week. The technical picture still looks bullish overall, with most indices having plenty of breathing room before hitting concerning overbought levels. However, rising inflation and interest rates continue to be the main headwind for the market, although for now investors seem to be ignoring the threat given that most of the intermediate-term Fed policy uncertainty has been removed and the Russian war headlines are having less and less impact on the market overall.

NASDAQ-100 tech bulls are finally seeing some relief, with their index of choice enjoying market-leading gains for the second week in a row, but Friday's weaker performance may be giving them some pause. Have we finally seen the lows for this correction? Or is this just one of those infamously vicious bear market rallies that hoodwinks us into believing the worst is behind us before the next rug-pull? While it's starting to look more like the former, follow the signals from our models, and you won't have to make that judgment yourself.

The SPX began the week with a tough technical fight over the 200-day SMA zone. The first breakout above on Tuesday was short-lived, and Wednesday led to a moderate decline to close back underneath the long term average. However, aided by lower Fed policy uncertainty, the bulls were able to slingshot back above on Thursday and continued the momentum into Friday's close. The index is now slightly overbought on a short-term basis, closing +0.44% above the weekly upper Bollinger Band, but with a 9-day RSI of only 64.94.

Although the Dow was by far the weakest index on the week, with a mere +0.30% gain. However, it remains the strongest on the year and since the all-time high, barely down -4%. As risk appetite has revived now that the Fed policy uncertainty has been largely removed, we'd expect it to have continued weaker relative performance unless the bear's regain the momentum. Compared to the SPX, it is far less overbought on a short-term basis and did not manage to test its 200-day SMA this week, closing -0.33% below the long term average. 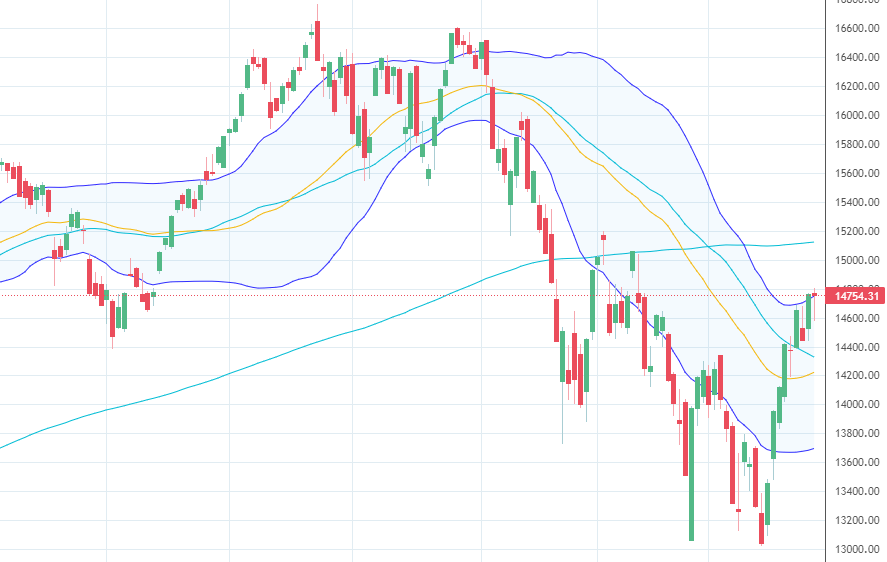 The NQ continued its strong rebound this week with another market-leading performance of +2.32%. Nevertheless, it remains the weakest performer on the year, and it was the only index to close in the red on Friday. This was possibly due to a surging 10-year treasury yield that tends to hurt growth stocks in the tech-heavy index more than the others, or it could just be that the bulls were in much need of a breather following the torrid pace of the recent gains since the correction low just below the 13k march on March 14th. On an intermediate-term basis, the index still has plenty of upside before becoming overbought as it remains -2.43% below its 200-day SMA.

Though the economy appears strong, rates remain historically low and valuations historically high. This is a dangerous combination as the Fed continues tapering asset purchases and expects to raise rates in 2022 and 2023. This week employment numbers improved with continued claims dropping substantially for the second consecutive week. However, the 10-year treasury yield continued to rise and the yield curve continues to narrow, but the 10-2 spread is still 0.19% from inversion, something that usually happens about 6 months to 1 year before a coming recession. Keep in mind that the market is forward-looking, and it usually peaks well before the start of the actual recession.

2022 has started with a bang, and not a good one for the bulls. So far our working thesis of a pickup in volatility this year has played out. The bulls managed another green week, albeit a much milder one than last week. With interest rates surging this week, I was frankly surprised the market held up as well as it did. This week's close has the Shiller Risk Premium (CARP) at a scant 0.2, indicating that equity holders are getting almost no compensation for taking the extra risk of owning stocks instead of bonds. This is nearly historically unprecedented, with the only competitor being the late 1990s. Last time that ended with the market peaking in March 2000 and not setting a new all-time high for nearly 13 years thereafter. Will this time be different?