In a very choppy week, the markets reacted sharply in alternating directions over the latest war headlines and Fed statements...

This was a very choppy trading week with no clear momentum building for either the bulls or the bears. It seemed that just when one team had a reversal lined up, a war headline or Fed statement would send the indices shooting in the other direction. Overall, this sort of choppy action after a very sharp decline last week is not a great sign for the bulls. If you look at past correction charts since 2009, the rebound usually has much more strength before stalling out, possibly indicating another retest of the lows coming next week. With the war in Ukraine ongoing, this week's primary market drivers were similar to last weeks and similarly hard to trade. Putin's nuclear alert over the weekend sent the indices down sharply, as did his army's careless attack on the Nuclear plant. This was balanced out mid-week by Fed statements indicating that just a 0.25% rate hike at the upcoming March meeting is a near-lock given the geopolitical uncertainty.

The market is now pricing in a 95% chance for a 25bps hike and even a 5% chance of no rate hike in March. This is down sharply from a couple of weeks ago when a 50bps hike seemed a near-certainty, and partially explains the market's rebound off the lows last week, but with dovishness now priced in and the market stalling out again, bulls still have plenty of concerns. Is the correction finally over, or will the weak follow-through and ongoing conflict lead us to retest the lows next week? Follow the signals from our models, and you won't have to make that judgment yourself.

The SPX started the week with a huge gap down of more than 2% at the start of the futures trading session Sunday evening out of fear of Putin's heightened nuclear alert. As often happens with these very large Globex session gaps, it was entirely erased the next trading day. However, the week failed to establish any sort of trend, with choppy action sending the index back down Tuesday, only to rise sharply Wednesday into an immediate 2-day reversal to end solidly in the red on the week on Friday, albeit well off the weekly lows of 4279.

The Dow was outperformed by the SPX this week, and it's the next index on the precipice of the feared "death cross", with the NQ already passing the bearish milestone this week. Unlike early in the correction, we are no longer seeing any flight to safety benefit of the Dow. The index fell below its lower weekly Bollinger Band on Thursday and now sits more than -4% below its 200-day SMA at 35,022. It's also shown the weakest bounce off of last week's lows of all the indices. 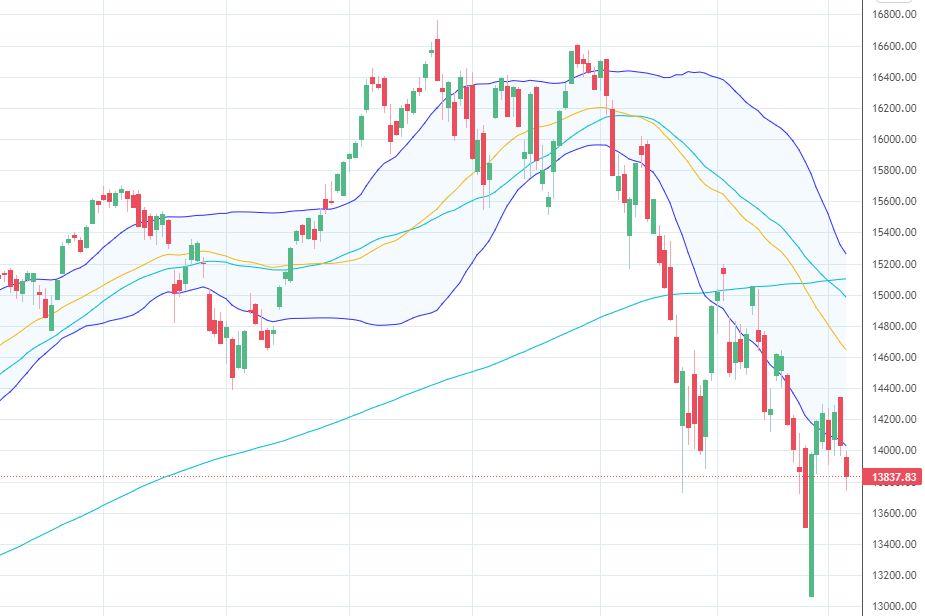 After a brief reprieve last week, the NQ resumed its usual position of worst performing index on the week with an ugly -2.47% performance. The index had an official death cross on Tuesday, where the 50-day SMA crossed below the 200-day SMA. Historically this is often a bearish sign of more downside to come and that a longer term bear market has begun. The NQ has only managed a weak bounce off its lows last week given the severity of the decline, and it now rests a whopping -8.37% below its 200-day SMA, a record for this correction.

Though the economy appears strong, rates remain historically low and valuations historically high. This is a dangerous combination as the Fed continues tapering asset purchases and expects to raise rates in 2022 and 2023. This week unemployment statistics improved, but sentiment and valuations remain at bearish extremes. Many people are already proclaiming the death of the nearly 13-year long bull market. Will they be proven correct, or will the market surge back to new highs later this year?

2022 has started with a bang, and not a good one for the bulls. So far our working thesis of a pickup in volatility this year has played out. The market had a strong rebound after the initial Russian invasion news broke last week, but that rebound stalled this week with every index closing solidly in the red, ending the bulls' hopes for a V-shaped recovery. The Fed is certainly more dovish than they were a few weeks ago; will that be enough to reclaim all-time highs in the coming months? Or has the market really entered the first secular bear market since 2009? I have mixed feelings personally. Valuations are certainly high enough for 4818 on the SPX to have been a multi-year high, and with interest rates already near zero and the Fed's balance sheet in the stratosphere along with soaring inflation, it certainly makes for a very bearish environment. However, the yield curve is still far from inversion and the strength of the consumer indicates we could still see one last bull leg, perhaps to the 5,500 range on the SPX.