After a strong start, the market turned around mid-week as overbought conditions caught up with the rebound...

With not much external news this week that mattered much to the markets, the indices mostly traded based on standard technical patterns. The momentum from the last two weeks continued on Monday and Tuesday into very short-term overbought levels. Following the standard playbook of such situations, profit taking occurred and took the indices down on Wednesday, and the loss of the short-term momentum led to an accelerated decline on Thursday to retest the weekly upper Bollinger Band on the SPX which had become the first significant support level built on the recovery uptrend. It held for now and the indices all closed in the green on Friday, with 2/3 also green for the week. The biggest concern for long-term bulls this week is that the 10-2 yield curve has inverted which has a very impressive historical record of predicting a recession coming in the next 6-12 months.

With the near-term Fed policy uncertainty largely removed, the next significant data release for the markets will be the CPI report that's still more than a week away, so we'd expect next week to continue the technical trading theme. However, with a geopolitical crisis still unresolved in Europe (though having less effect on the markets each week), there's always the potential for a shock in either direction. Is the recovery legitimate enough to lead the market to new all-time highs this year? Or is this just one of those infamously vicious bear market rallies that hoodwinks us into believing the worst is behind us before the next rug-pull? While it's starting to look more like the former, follow the signals from our models, and you won't have to make that judgment yourself. 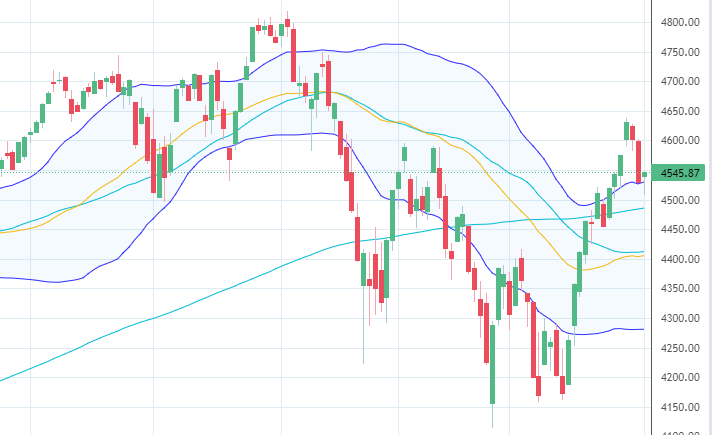 The SPX began the week with a large surge on Monday and Tuesday to quickly hit short term overbought area, with the index closing +2.32% above the upper weekly Bollinger Band. The momentum waned on Wednesday as profit taking hit the market. The selling accelerated Thursday afternoon with a large red candle in the last hour of trading to close nearly exactly back at the upper weekly BB, which had now become the first level of significant technical support. After a brief test of 4500 on Friday, the index closing solidly in the green for the day and barely green on the week. 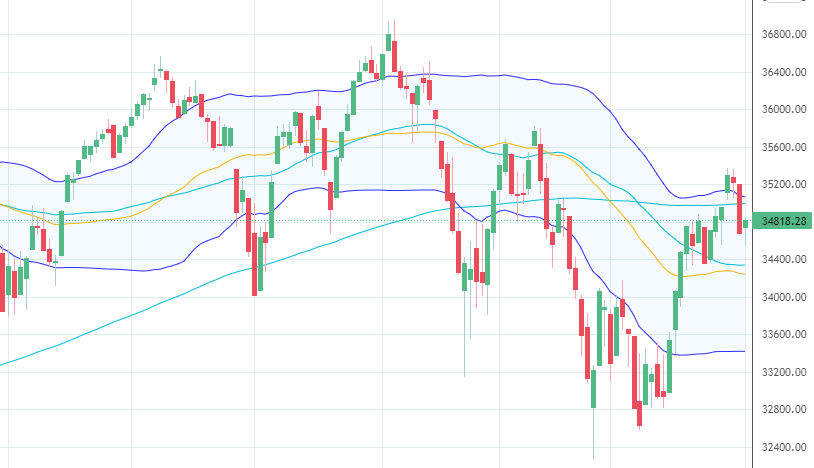 The Dow continued its streak as weakest index into a second consecutive week, but it still remains the strongest on the year. Of all the indices, it is by far the least overbought from a short-term technical perspective, closing -0.61% below its weekly upper Bollinger Band. Its 200-day SMA is finally tilting upwards again for the first time since mid February, but it remains firmly in the infamous death-cross like the other indices. The correlation between index movements has increased rapidly over the past few weeks as the rotation narrative dissipates. 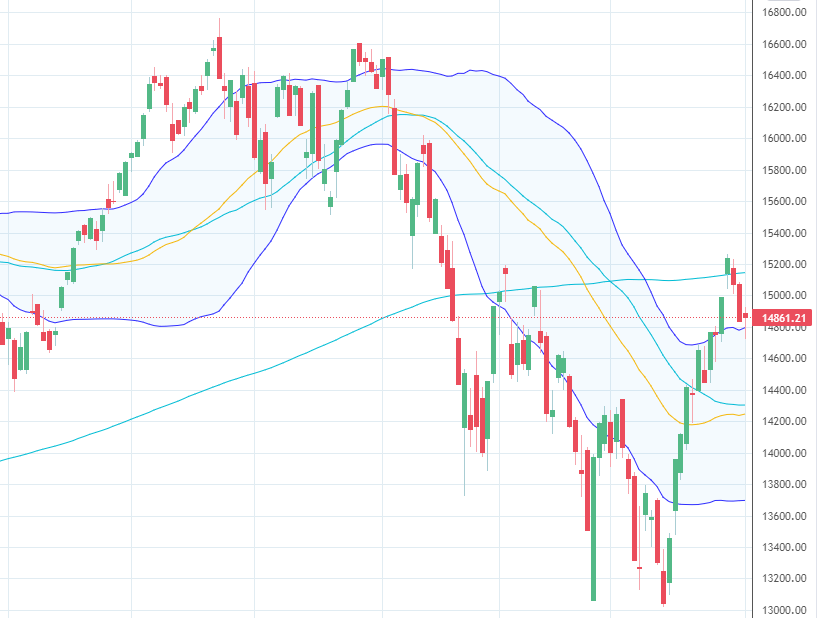 The NQ was by far the strongest performer on the week, and the only index solidly in the green. It continues to bounce hard on most overall green days, as momentum traders who had abandoned it near the lows of the 13-13.5k range come back in full FOMO force as usual. It even briefly crossed back above the 200-day SMA on Tuesday before succumbing to the profit taking decline on Wednesday and Thursday with the other indices. Its high this week of 15,265 marks an incredibly +17.4% gain in less than 3 weeks off its correction lows, one of the fiercest rallies in recent memory. Nevertheless, I think the "easy" recovery trade is now over as the index has mostly reversed the unfairness of this year's overreaction to the threat of rising rates, and going forward it still has not overcome any of the serious long term issues (high valuations, megacaps maxing out their TAMs, potential monopoly breakups, etc).

Though the economy appears strong, rates remain historically low and valuations historically high. This is a dangerous combination as the Fed continues tapering asset purchases and expects to raise rates in 2022 and 2023. This week employment numbers improved with a new post-pandemic record low overall rate at 3.6%. However, the 10-year (2.39%) and 2-year (2.46%) treasury yields inverted for the first time since 2018, indicating that a recession is likely over the next 6-12 months. Howver, recessions vary from mild blips (1990 - 1991) to catastrophic collapses (1929 - 1933), and though the curve has an incredibly strong historical record of predictive power, it lacks ability to distinguish between the severity of these two extremes. Keep in mind that the market is forward-looking, and it usually peaks well before the start of the actual recession.

2022 has started with a bang, and not a good one for the bulls. So far our working thesis of a pickup in volatility this year has played out. Except for the NQ, it was mostly a flat week for a change, albeit with much intra-week volatility. The 10-year yield finally took a breather this week, improving relative valuations of equities to bonds slightly, but the yield curve inversion certainly has a lot of longer-term investors anxious. A recession combined with the extremely high valuations today and the highest inflation in over 40 years has a lot of people understandably concerned about the prospect of stagflation and zero or even negative real returns for stocks over the next decade. Count me among them, but fortunately at Grizzly Bulls we don't rely solely on unsustainable bull markets to provide us with solid returns.