In a very choppy trading week, the market bounced around wildly before resolving lower as it digested the CPI report...

In a holiday-shortened week, the market traded with very choppy action. The main news point of the week was the CPI report. The market sold off on Monday and Tuesday morning ahead of the report, and upon release it reversed and surged strongly for a couple of hours as investors became optimistic that inflation may have peaked. However, the initial bullish reaction was entirely erased later the same afternoon. For the rest of the week, the SPX traded back and forth in a 100 point range as the tug-of-war continued. Bulls believe that inflation is mostly due to temporary supply chain issues, and that the economy is strong enough to withstand the more hawkish policy, while bears believe that the Fed is backed into a corner and has no choice but to sacrifice the market to save the dollar, backed up by a disturbing article stating that the Fed needs "to force stocks to fall" at all costs.

Personally, I'm in a more neutral camp overall. I think inflation is largely caused by temporary issues, but that the Fed should have begun to normalize interest rates last year. However, valuations are very troublesome from a historical perspective, but valuations alone are a poor short to medium term timing indicator. It's very possible for the market to shrug off inflation fears and have a final bull leg up to 5500 - 6000 region to exceed dot com highs. In the medium term, are we going to see a new all time high or breach the official bear market mark first? Follow the signals from our models, and you won't have to make that judgment yourself. 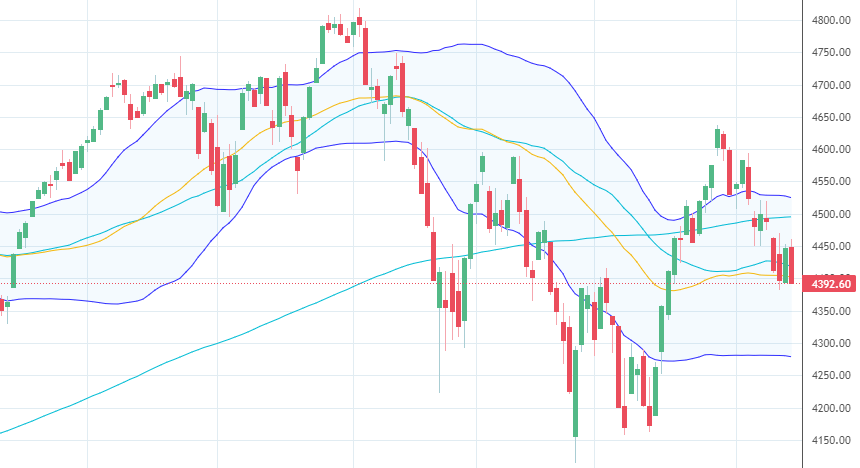 In a shortened trading week, the SPX bounced around in choppy action, but ultimately only managed to close green one out of four days. The week started with a moderate gap down with continued selling into Tuesday's CPI report. Another gap down before the report ended up with the market surging, temporarily at least, as the numbers came in slightly better than expected and investors got renewed hopes that inflation has peaked. However, the surge was ultimately completely erased and on Wednesday and Thursday, the market continued to trade in choppy action around the 200-day SMA, ultimately with a bearish finish in the final 2 hours, closing just below the middle weekly Bollinger Band at 4401. 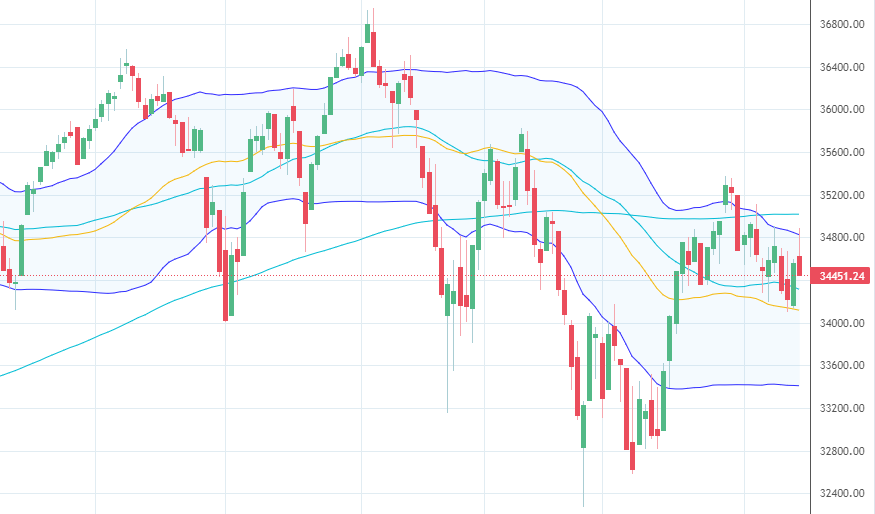 Although it closed in the red, the Dow held up by far the best of all the indices this week under the selling pressure. It's clear that whether accurate or not, investors believe that the blue-chip companies of the Dow have less to lose from an inflationary and rising interest rate environment. The index followed much the same overall pattern as SPX, except for much more muted moves. On Thursday it briefly tested its weekly upper Bollinger Band at 34,826 before succumbing to the long weekend selling pressure. Despite the strong relative performance, the Dow remains -0.85% below its 200-day SMA. 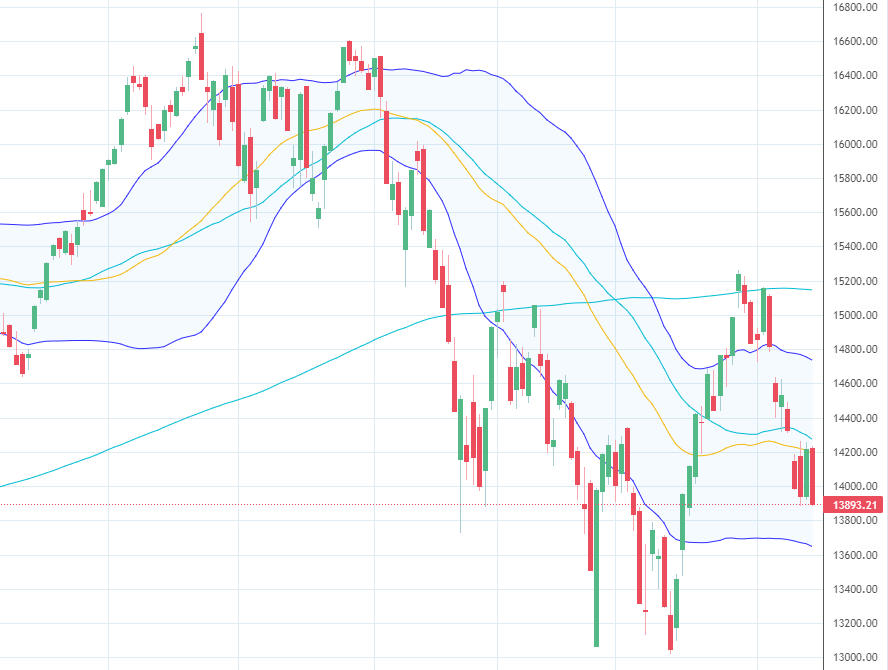 Another week and another horrific performance for the tech heavy NQ. Investors continue to see rising inflation and interest rates as reasons to shift to "risk-off" mode, and with its younger companies and relatively high valuations, the NASDAQ-100 is seen as the riskiest index to hold. Higher interest rates of course also change the inputs to the DCF valuation, making high growth stocks look even more overpriced. Moreover, as the index has lost its former bullish momentum, many technical traders no longer want to touch it. All of these factors seem to be hitting hard at once and the NQ can't catch a break. Nevertheless, its still far from oversold on the daily charts, resting +1.8% above its weekly lower Bollinger Band, indicating that more downside next week is certainly possible.

Though the economy appears strong, rates remain historically low and valuations historically high. This is a dangerous combination as the Fed continues tapering asset purchases and raising rates in 2022 and 2023. This week Q1 earnings and the overall drop in equity prices improved the P/E and CAPE ratios, but the 10-year yield's continued surge pushed the Shiller Risk Premium into negative territory for the first time in more than 20 years. This means that investors are not only not being compensated for taking the increased risks of investing in equities, they are actually paying for that privilege. Although economically this makes no sense, bulls often retort that they don't expect the 10-year to rise any further and that earnings are have exploded in recent years, noting the large difference between the P/E and CAPE which means the CAPE (which averages earnings over the last decade) will come down substantially in the coming years.

2022 has started with a bang, and not a good one for the bulls. So far our working thesis of a pickup in volatility this year has played out. While digesting the CPI report, choppy action ultimately favored the bears towards the end of the week. However both the bulls and the bears have strong cases in the short term. The AAII sentiment number is at a bearish extreme with a mere 15.84% bullish reading, which usually indicates a reversal is near. On the other hand, the bears have technical momentum on both the 10-year yield and the SPX with plenty of downside before hitting oversold conditions. These strong debates are what make that market so volatile right now, and until inflation and the 10-year yield stabilize, I'd expect it to continue.