The markets bounced early in the week but were unable to maintain bullish momentum, falling steadily on Thursday and Friday on rising geopolitical risks...

We've just seen yet another very volatile week, with the pattern of early-week strength ending in late-week bearishness continuing for a third straight week. Like last week, the bears won again with all indices closing solidly in the red and each below their respective 200-day SMAs. We heard conflicting reports of escalation and de-escalation of the Russia-Ukraine potential conflict all week with the Whitehouse erring on the side of fearmongering Thursday and Friday leading to some panic selling. Headline-oriented markets are notoriously difficult to model and trade, but the good news is that perhaps despite popular belief, they are the exception rather than the norm. Normally the market is guided by macroeconomic data, monetary policy and investor sentiment which can be analyzed indirectly through the VIX and technical analysis.

The Fed minutes and accompanying member comments were more dovish than expected, and the market is now pricing in a higher chance of just a 0.25% hike in March than 0.5%. This helped cool down bond yields and in turn supported the mid-week stock momentum. Unfortunately for the bulls, it wasn't enough to offset the rising fear of war in Eastern Europe. Are we going to retest January lows next week, possibly even breaking them and falling into a bear market? Or will we put in a higher low next week and continue the rebound with more confidence? Follow the signals from our models, and you won't have to make that judgment yourself.

After a quick drop and rebound on Monday, the SPX rallied on Tuesday and Wednesday with two consecutive closes back above the 200-day SMA that was violated last Friday. The bulls failed to maintain the bullish momentum on Thursday as the markets once again entered free-fall mode on Russian warmongering fears with the market slicing back through the 200-day SMA and weekly lower Bollinger Band to close at a new weekly low of 4349, yet still +3% above the correction low of 4223 set on January 24th.

The Dow was the weakest index this week, only managing to close in the green on Tuesday. Its 200-day SMA acted as strong resistance, and the index was unable to break above it, even on an intraday basis, after multiple attempts on Tuesday and Wednesday. Its overall declines on Thursday and Friday were roughly the same magnitude as the SPX throwing some doubt behind the rotation narrative as growing bearish sentiment is leading to less sector discrimination in the thrashings. The Dow also now has the flattest sloping 200-day SMA that is threatening to turn negative if things don't improve on the charts next week. 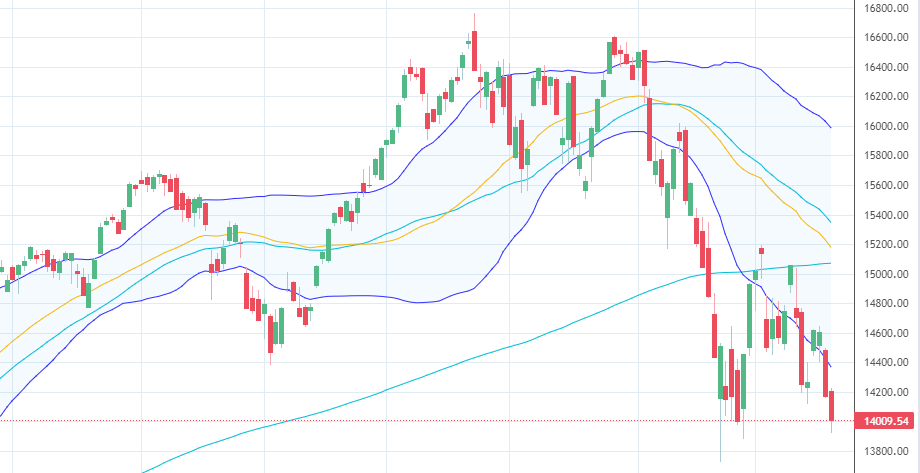 The NQ was the most volatile index on the week, rallying the strongest early and falling the strongest late, for an overall middle performance of -1.71%. A potential good sign for big tech bulls, is that any sign of strength lately has immediately seen the NQ leading the gains. It seems people know big tech is trading at a relative discount after its severe beatdown this year, but no one wants to be the first to catch the falling knife on the red days. Friday's close was the second lowest daily close for the index since the correction began, and the index sits barely +2% above its January 24th low of 13,724. Furthermore, unless the index rallies very strongly over the next two weeks, a death cross (where the 50-day SMA crosses below the 200-day SMA) will soon be a bearish reality, adding to the bulls' worries.

Though the economy appears strong, rates remain historically low and valuations historically high. This is a dangerous combination as the Fed continues tapering asset purchases and expects to raise rates in 2022 and 2023. This week bullish sentiment dropped to an extremely low level below 20%. Many people are already proclaiming the death of the nearly 13-year long bull market. Will they be proven correct, or will the market surge back to new highs later this year?

2022 has started with a bang, and not a good one for the bulls. So far our working thesis of a pickup in volatility this year has played out. Nevertheless, the bull market won't go down without a fight, and even after the sharp declines on Thursday and Friday, the indices are still solidly above their lows from late January. Right now market direction is largely driven by the actions of a single individual in Vladimir Putin which makes for a precarious trading environment. The geopolitical fears are rattling investors more than usual given that the market has been so unstable this year already. We're looking forward to a resolution in the near term so that the market direction will once again be steered by the familiar factors of macroeconomics, monetary policy and investor sentiment that are more easily modeled.